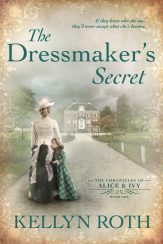 Claire will stop at nothing to provide for her daughters. An unwed mother, she does everything possible to raise them whilst avoiding her scandalous past. Some secrets are best kept, even between mother and daughter. Alice longs for a father, especially if that means her mother will be happy. She takes matters into her own hands—but she never expected what she finds.

Despite her efforts to shelter her daughters, Claire’s ghosts rise up to haunt her, and any semblance of control over her life vanishes. If her secrets are uncovered, what will become of her family?

It’s a sweet story that will work you to another time and place. Set in England during the 1800s, this is a wonderful story that will interest you until the end. I thought it was sweet. I liked Alice and Claire. They both had be brave and we’re determined. It’s from the perspective of both Claire and Alice but I feel like Alice had more of a voice then Claire.
I thought each character played their part well. I could visualize what was happening clearly. I can’t decide which person I liked best.
It’s a good story with a solid Christian message of hope and forgiveness and second chances.
I look forward to reading the next book in the series.
I recommend this book to my family and friends.

I voluntarily reviewed a complimentary copy of this book which I received from the publisher. All views expressed are only my honest opinion.

Kellyn Roth is a Christian historical women’s fiction & romance author from North-Eastern Oregon who has independently published multiple novels, the most notable being The Chronicles of Alice and Ivy series. You should definitely call her Kell. Kell lives on family-owned property outside an unmemorable but historical town with her parents, two little brothers, arbitrary cat, precious border collies, a dozen cows, and lots of chickens. She also possesses a classic, vintage aesthetic which does not at all speak to her country girl side, but such is life. When not writing, Kell likes to blog, teach writing to her various students, have day jobs which allow her to keep her car properly insured, and spend lavish amounts of money on Dairy Queen french fries.

Reflections From My Bookshelves, February 4

For Him and My Family, February 5

Labor Not in Vain, February 7

To celebrate her tour, Kellyn is giving away the grand prize package of a paperback copy of both The Dressmaker’s Secret and Ivy Introspective, as well as a $25 Amazon gift card!!

Be sure to comment on the blog stops for nine extra entries into the giveaway! Click HERE to enter.

4 thoughts on “The Dressmaker’s Secret by Kellyn Ross”