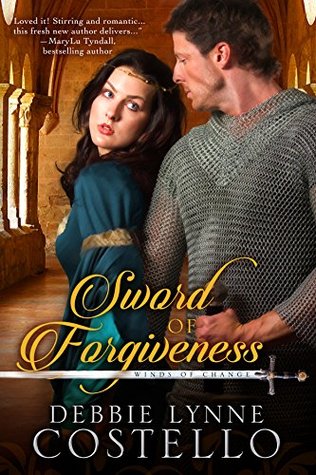 After the death of her cruel father, Brithwin is determined never again to live under the harsh rule of any man. Independent and resourceful, she longs to be left alone to manage her father’s estate. But she soon discovers a woman has few choices when the king decrees she is to marry Royce, the Lord of Rosencraig. As if the unwelcome marriage isn’t enough, her new husband accuses her of murdering his family, and she is faced with a challenge of either proving her innocence or facing possible execution. Royce of Hawkwood returns home after setting down a rebellion to find his family brutally murdered. When all fingers point to his betrothed and attempts are made on his life, Royce must wade through murky waters to uncover the truth. Yet Brithwin’s wise and kind nature begin to break down the walls of his heart, and he soon finds himself in a race to discover who is behind the evil plot before Brithwin is the next victim.

I was given the Audiobook to this story to review. The narrator had a very breathy voice and accent. This made it difficult for me to listen to. It took awhile to get used to the narrator. I ended up switching back and forth from reading and listening. Debbie Lynn Costello did a great job in creating her character’s to be realistic. I found myself liking Brithwin and not Royce at the beginning. Royce seemed heavy handed and controlling but I think that’s because he was true to the men of that time period.  I’m not a big medieval romance fan but this story was all right. It was a little hard to get into but it got better as I read more of it. Sword of Forgiveness was a story of forgiveness and second chances. I think the reader can learn from this story along with the characters.

If you like medieval romance, this would be a good book for you.

I received this book for my honest review.

Debbie Lynne Costello is the author of the #1 Amazon bestseller Sword of Forgiveness, a medieval romance. She has enjoyed writing stories since she was eight years old. A true animal lover, she thought she wanted to be a veterinarian until she learned that there wouldn’t always be a happy ending to each pet she treated. She raised her family and then embarked on her own career of writing the stories that had been begging to be told.  She and her very own hero have four children and two grandchildren and they live in upstate South Carolina. She has worked in many capacities in her church and is currently the Children’s Director. When not spending time with her husband, four children or grandchildren you can find her hanging out with her Arabian horses and Tennessee Walking horses. She accepted the Lord into her life at the age of 16 and is thankful for the stories He gives her. She gives Him all the glory for everything she writes because without Him she’d not have a word to pen. She prays that the stories she tells will bless her readers and be an encouragement to them. She loves her horses and curling up to read a good book with her Shelties and German shepherd snuggled around her.